"Father of His Country"

George Washington was the military leader of the rag-taggle army that wrestled American Independence from Britain. He could probably have been the first King of America if he had wanted to be. But his ambition did not lead him in that direction and instead he became the first President of the United States. 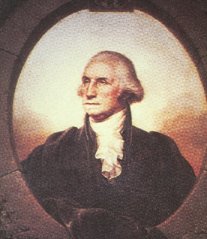 George was the first born of his father's second marriage. He was born into Virginia Colony's aristocratic society. His father died when he was 11 years old and his older half-brother Lawrence became his male role model and mentor. His schooling was not formal but he managed to obtain education from various sources and learned to be a surveyor. At the age of 16 his surveying skills landed him a job with Lord Fairfax that lasted for several years and gave him a lifelong appreciation of the western lands.

Following his surveying experience he joined the Virginia military. Shortly thereafter he gained the rank of Colonel and was active in the Ohio River valley engaging the French and participating in events that eventually led to the French and Indian War.

After a brief period out of the military he returned in 1755 and as a reward for bravery in early battles he was appointed command of the Virginia militia forces. But after a couple of frustrating years defending the frontier he again resigned his commission and returned to Mount Vernon which he was leasing prior to receiving it as an inheritance. In 1759 he married Martha Dandridge Custis, a widow with two children, and settled down to a life of managing his plantation, raising Martha's children as his own (George and Martha never had any children) and participating in local politics as a member of the Virginia House of Burgesses.

By the 1770's relationships between the Colonies and the mother country were becoming strained. George had gradually become active in the struggle and represented Virginia in the first and second Continental Congresses. In 1775, after blood had already been spilled in the conflict, Congress appointed him commander in chief of the Continental Army. With lackluster support from the colonies and pitifully short of supplies and trained recruits George Washington and his troops managed to outlast the British and eventually won independence from Britain at the Battle of Yorktown in 1781.

A grateful people elected him their first president of the United States in 1788 and reelected him for a second term in 1792. They would have probably reelected him again in 1796 but he decided to step down and retire to his beloved Mt. Vernon.

As a member of the Liberty generation George Washington was a reactive generational type [the thirteeners (Generation X) cohorts are the reactive types in the present generational cycle]. George was a very ambitious young man and led a more controversial life than the popular mythology admits. He was not particularly intellectual or idealistic and in fact was intensely pragmatic and efficient in his military and civilian life. He made many enemies while he was in office and his single minded personality had a lot to do with it. His post war negotiations with Britain, leading to Jay's Treaty, left many on the opposite side of the fence from the President when he retired from public life.