The Lewis and Clark Expeditions

In 1804, Meriwether Lewis and William Clark began a journey that was to become the symbol of America's next century. They were the first United States citizens to cross the North American continent from the Atlantic Ocean to the Pacific and the last to cross it without knowing what was there. 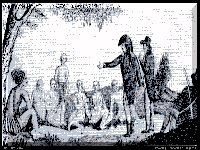 Although they didn't accomplish their original goal of finding a water passage across the continent, they obtained a wealth of biological, geographical and cultural knowledge and proved a crossing could be done. The United States would never be quite the same.

Meriwther Lewis and William Clark were members of the Compromise Generation (the adaptive generational type) and were raised in the heat of the Revolutionary War. Both of these men considered it a solemn duty to carry out the difficult tasks that were assigned to them and never questioned their need to do it. Lewis did not recover from the strain that this great achievement placed on him and died a mysterious death in 1806. Captain Clark went on to a long distiguished service in the West as an Indian Commisioner.

The following text is a timeline of the Journey. It is not intended to be an exhaustive treatment, only a reminder of the deed. There are many books about the Journey and I think anybody would find it worthwhile and inspiring to spend a few nights reading Lewis and Clark's story and going over the Journals. It isn't often that one event can capture the pulse of a country at a moment in time like this one did.

As with most of the information on the TimePage, I am building this page out in the open. I know there are a lot of Lewis & Clark fans out there. Join with me and tell me about your favorite events.